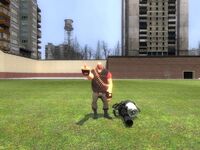 Ragdoll are models of in game characters which you can manipulate with the use of the Physgun. Unlike props and other models, ragdolls have bones which allow them to be posed in a multitude of different ways

Ragdolls can be spawned with the spawnmenu (Q), just like normal props. When spawned, ragdolls are limp, but with the use of different tools, they can posed. Using the Physgun, the bones of ragdolls can be independently. A ragdoll's bones can be unfrozen all at once by pressing R.

Most ragdolls are equipped with face and finger posing (controlled by the Face Poser and Finger Poser respectively). Other tools like the Inflator can also be used to change appearance of ragdolls. Prop tools like balloons and thrusters cannot be attached to most ragdolls.

Retrieved from "https://gmod.fandom.com/wiki/Ragdoll?oldid=24933"
Community content is available under CC-BY-SA unless otherwise noted.